I have a problem with the word ‘challenge’ – specifically its seemingly increasing use as a noun. This whole horizon walk thing has certainly had aspects to it that are challenging and there have been plenty of times where I’ve felt challenged – but this isn’t ‘a challenge’.  Challenge fits too neatly into the neoliberal – ‘give it 110%’ shakedown we’re living grit-toothed through. Challenge is an aspect of what this is but only an aspect – there’s adventure, risk, uncertainty, fun, problem solving, physical effort, mental struggle and beauty – lots and lots of beauty. To privilege or emphasise challenge above these other facets of an outdoorsy undertaking seems unhealthily masochistic, and it’s bringing an instrumental, economic mentality into what should be a time/place for play. I’m quite happy to think of this walk as ‘playing out’.

As for a purpose – there doesn’t have to be one beyond the playing with the landscape that drawing a line around it and then walking that line is. I have realised though that this walk does do something that seems kind of purpose-like: it makes my relationship with the horizon physical. I’ve grown up, worked and done pretty much everything I’ve done under the gaze of this crescent of hills – in a way they define me. I’m sort of paying tribute to that by walking it – I’m adding a physical element to the looking at and looking back. 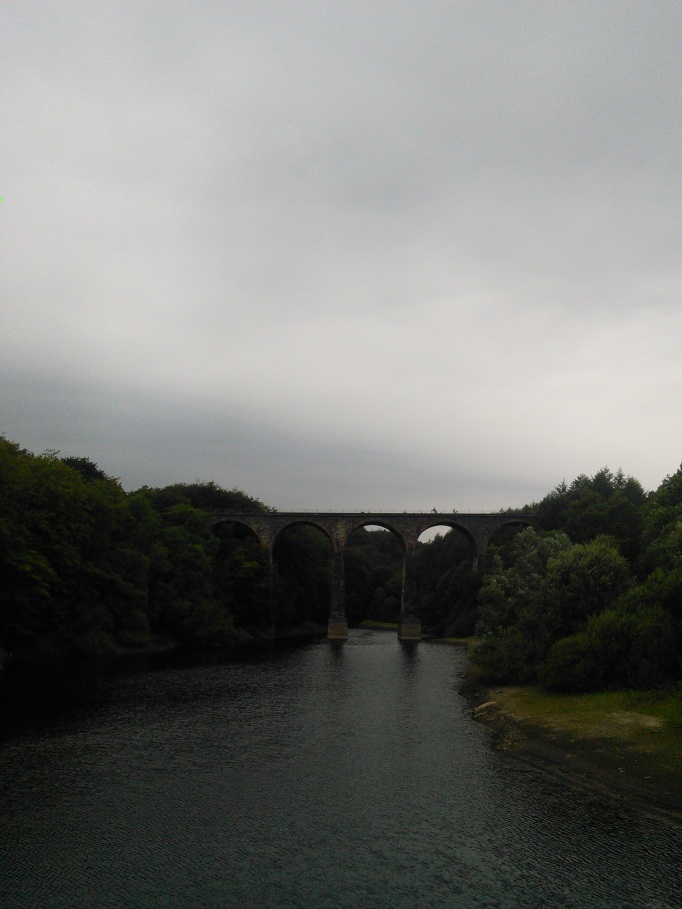 I wearily pack up the tent and head down from the woods to the reservoir. It’s a really beautiful place, but I’m eager to get away. I squeeze past a skip that’s been plonked at the start of a public footpath and then misnavigate into some farm buildings where, unnervingly, there’s what appears to be a fiercely torn open lorry trailer. 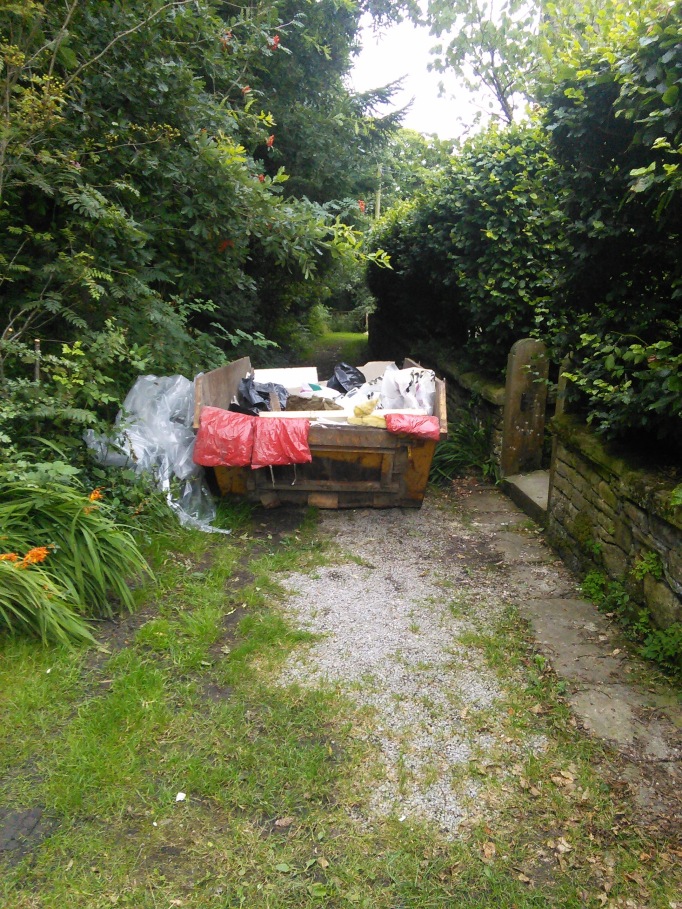 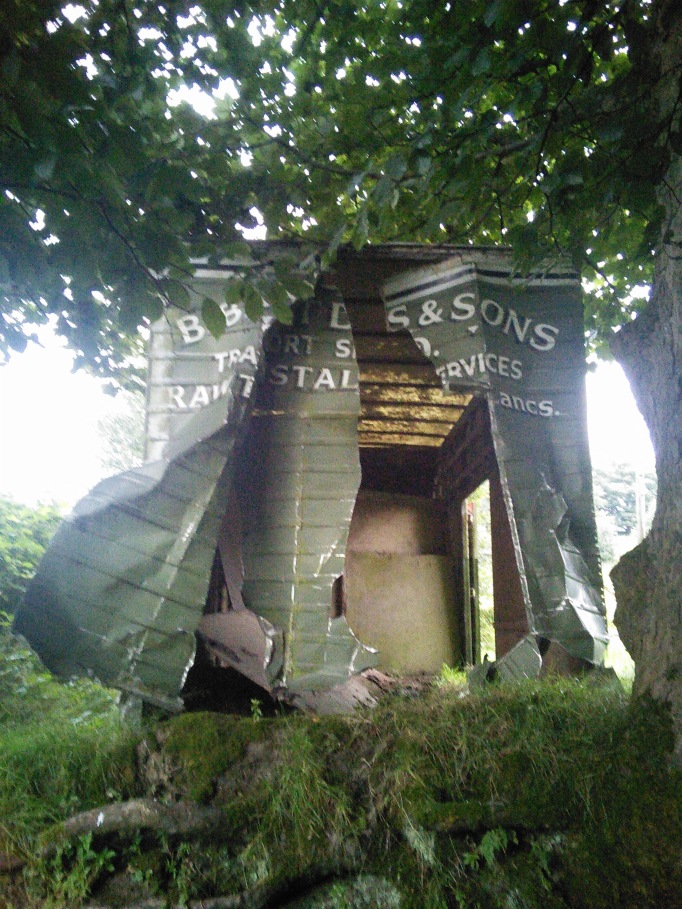 I find the right path eventually, and move through some grotty woods to a lane running between fields. It takes me past another old agricultural building re-purposed for the wealth-creators. As I pass I hear the security intercom sounding and think I must be being addressed – warned off perhaps – but then I realise that, bizarrely, the intercom is loudly playing a phone-in radio show.

I pass through a lovely little hamlet – stone houses jumbled around a curling cobbled lane – that feels occupied, as in taken over. The cars parked, the signs of renovation… I’m not imagining that these buildings were the scene of something idyllic, that was then crushed by a shockwave of cash from the cities, but there is a feeling of spoils being taken.

The Ordnance Survey map (digital) I’m using shows a public footpath running up through the drive of a farm, but as I get to it there’s a very unfriendly sign insisting that there’s no access this way and a CCTV camera on a tall metal stalk reinforces the point. I see there’s another way to the path further up the road and head up there seething a little. I think of paths as kind of sacred and there’s nothing that gives me more of a hit of civic pride than a well maintained and signposted public footpath. Maybe there was agreement about this one and the OS just hasn’t quite caught up; maybe there was some ceremony of deconsecration – maybe it isn’t just contempt.

I find my way around to where I would’ve got to a bunch quicker and begin the trudge up to Turton Heights. It’s been threatening to rain all morning and now it starts – and it’s really going for it. I’m making my way up a signposted route through a field, but if the signs ever followed anything like a discernible path then it’s long overgrown. There are shoulder high rushes in enormous clumps and they quickly saturate my clothes as I squeeze through and stumble over them. I get to the top of the moor and it’s just chucking it down. I’m soaked and my shoes are audibly squelching as I walk. I realise how lucky I’ve been with the weather – I don’t know what I’d have done if there’d been two consecutive days like this earlier in the week. I don’t think I would’ve been able to handle it. 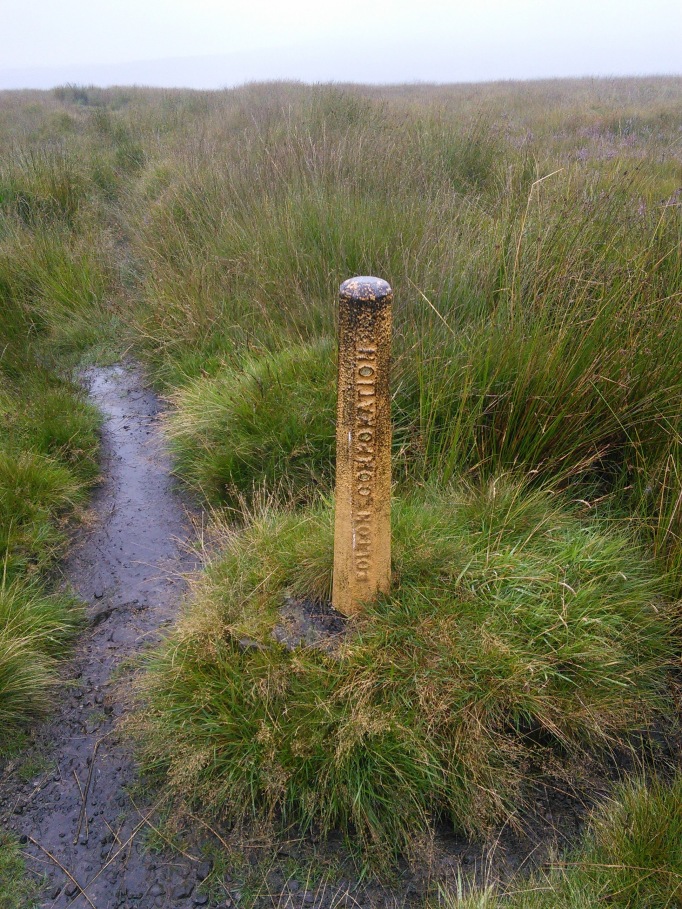 I’m starting to shiver and I decide for the first time to cut out something on my route – I’ll skip Turton Moor and the Hanging Stones. I’ll come and look at them another time. Right now, for the first time in the whole adventure, I’m really not enjoying myself. It cuts two miles off my total, but I’m still happy I’ll have done my 100 miles – the detours from the main route to the campsites and such will have more than made up for the loss. It’s still a hard decision though and I hesitate on it for a good few minutes – but cold and weariness eventually win out, and I cut off the route and head towards Belmont. 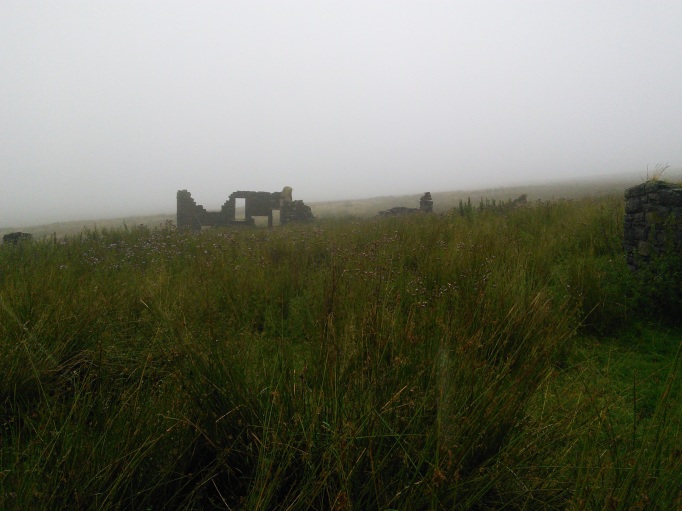 I’m at the foot of Winter Hill now, but I’m not ready to head up just yet – I need to get out of the rain if just for a few minutes. I head into the first pub I see  – the Belmont Bull -which, marvellously, has a sign saying ‘Muddy boots and wet bums welcome’ – I had been worried about exactly those things. I’m welcomed in by the barman, Tom. There’s no better icebreaker than looking like a defeated, sodden and overladen mess and we’re quickly talking about the walk I’ve been doing and how it’s all going to climax with Winter Hill. I complain to Tom about the rain and the rushes and he says something like – ‘Ah, the rushes, yeah. I do like a walk in the rain though’. Instantly I start to feel that I might have been being a bit soft about the rushy terrain of the West Pennine Moors. Tom says he knows a better way up Winter Hill than the one I’d been planning and I’m really happy to hear about it. It doesn’t appear on the OS maps and I never spotted it on Google Earth – but it sounds like it’s going to get me up there in a satisfyingly direct way. I try pouring the water out of my shoes, wringing out my socks and then giving them repeated blowings under the hand-dryer in the gents, but it’s really not making much of a difference. I have a couple of coffees and realise I’m starving so I order lunch. As I’m eating I have a wonderful realisation: I can leave the rucksack here. I’m going to be coming back here anyway – I’ve spoken to Rachel and she’s going to pick me up from here; I’m certainly not getting any Manchester horizon pics from the zoom-camera today; there’s nothing in there I’ll need up on the hill. I ask Tom if that would be cool and he says yes. This is amazing. I recheck the route with Tom and then set off – 33 pounds lighter. I’m practically skipping as I make my way to the outskirts of the village, past a little reservoir known locally as ‘The Blue Lagoon’, across some low wooden bridges over swollen streams and begin the ascent. The path is muddy, crumbly, full of slippy unstable rocks and great patches of bog and largely very steep – but it’s visible. It takes just under an hour for me to get up the first ascent, across the boggy ‘flats’ and then up onto the hill itself. Lord knows how long it would’ve been if I’d still had the weight of the rucksack on me. It’s really wild with wind and rain and the visibility is next to nothing. I can make out the smaller transmitters but not the main spire I’ve taken to be the end of my route. I find the trig point, which is great to see, but I want to find the fucking massive transmitter tower that’s on this hill but which is completely invisible to me now. 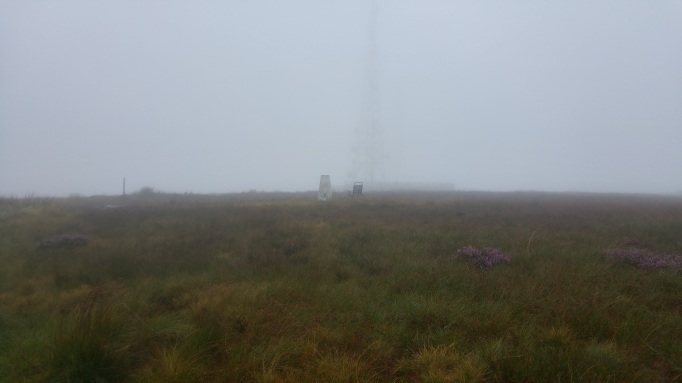 I get out my tablet with my OS map on it, hoping it will hold out in the rain for long enough to show me where to go, and I see that I need to follow a path southeast which then branches southwest and I’ll be there. Splashing directly through massive puddles – why bother going around when you’re already soaked? – I finally make it to the gates of the transmitter’s compound and… I still can’t really see it – there’s a sort of detectable darkening vertical line through the fog. That’s it. I try and do a quick video of myself being there and hurry off downhill.

Seeing Manchester from this iconic bit of my horizon, and seeing the whole route that I’d walked to get here – the triumphant last gaze at it all – wasn’t going to happen. Sod it. It’s cold, let’s go. I scurry back down the path, which is by now pretty much a stream, cackling loudly and frequently.