I had my first bit of horizon cynicism at the campsite. After explaining what I was doing, Jack said flatly ‘You can’t see Winter Hill from Manchester’. It might be true that he’s never seen Winter Hill from Manchester, but in the right place and on the right floor it’s there alright – it really looms over the city. I said ‘well, if you lean out from my balcony and the building they’ve just put up on Oxford Road wasn’t there, then you’d see the transmitter’. At this, Jack’s mate said ‘you can’t just base it on any… flag that’s on something’ and walked off, seeming amused and satisfied that the nonsense of something had been unearthed.

I think there’s good reason to be cynical about this venture. Despite having used a method for working out what the horizon is from one perspective, there’s still a lot of arbitrary-ish decisions been made about what’s included in the route and what’s not. Wild Bank clearly occupies a prominent portion of the skyline to the east of my flat, but including it would’ve meant a 6 mile detour, and the ground behind it is higher and more substantially horizon-like to me. Excluded for similar reasons are notable lumps like Sponds Hill, Whaley Moor, Crompton Moor and Knowl Moor. There’s also aesthetic tweaks and additions – having the walk being between two transmitters, for example, and making it 100 miles long. It can be annoying to people when people make up the rules and blur the edges of things. It kinda confirms to people that nothing’s pure and proper. Nobody’s doing anything PROPERLY ANYMORE.

It felt good to be moving again and getting out onto higher ground. Today was beautiful – scorching hot in the valleys and on the slopes but breezily warm on the high moors.

I got up to Alderman’s hill – a key feature of the view from my kitchen window, and then made my way across Saddleworth moor.

This was some truly beautiful walking. The moor and the valley below looked amazing; a cloud bank was rising off the moors further out that I’d be walking in later in the day. You don’t get many mornings as stunning as this one.

Following this route that I’d plotted out on Google Earth a month ago can sometimes feel a bit like being the pawn of a god I once was. The route followed a pathless heavy-going trudge up to Hollin Brown Knoll – an area associated with the Moors Murders. I assumed there would be some horizon-based reward waiting for me as I arrived as I’m not really into murder tourism… or rather, I just don’t know what disposition to have at the scene of something so brutal and famous. As it was, there was little to see there but moor. Maybe there was some horizon or other interest a few hundred yards further on, but it had been tiring getting here and I wanted to get away. The emptiness of it on the way up though had been really gorgeous. There was also a long trench or ditch-like structure that crossed large sections of the moor and I want to try to find out what that is. 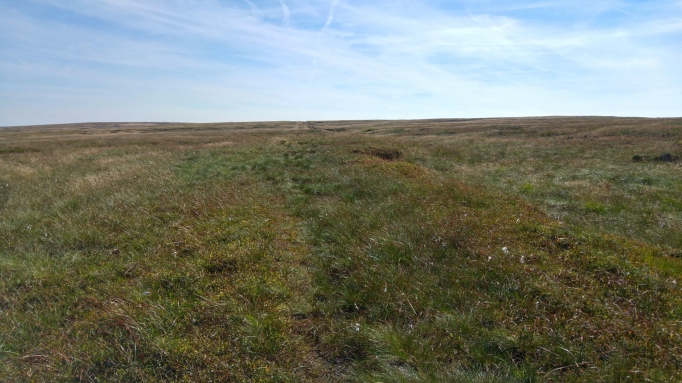 I finally got off Saddleworth moor, starkly beautiful as it had been it was good to be getting back on a path. I picked up the Pennine Way and followed it between Saddleworth and West Yorkshire, passing Black Moss reservoir from which – I was surprised to see – Manchester was clearly visible. This meant that the overlooking hill – West Nab above Marsden – was probably unfairly overlooked as a contender for inclusion in my horizon. Sos mate. 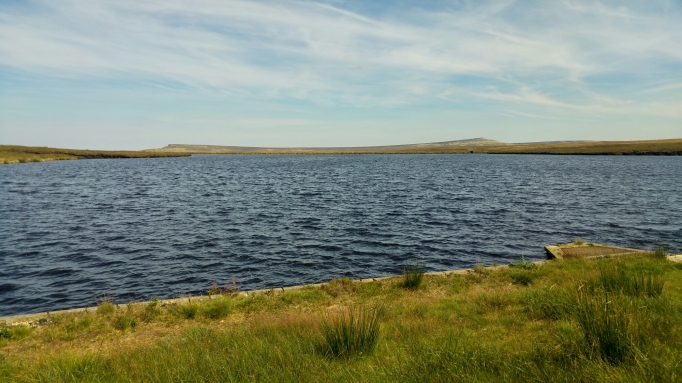 I passed Standedge, which overlooks Delph and Diggle, and from there I was getting into proper South Pennine Moorland. There’s something about these particular moors – those immediately either side of the M62 at the border of Lancashire and West Yorkshire that really feel like home to me. There’s none of the plunging and soaring dramatics of the Dark Peak or the gentler gorgeousness of the White Peak, but there’s something splendid about the high emptiness and the distances visible from here. It’s also something just about their colour and texture – their smooth grandness. 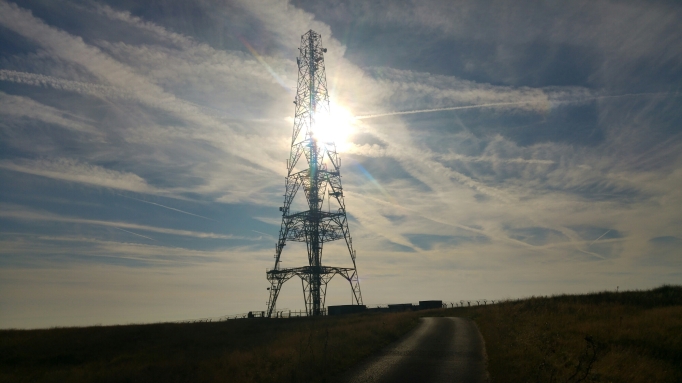 The Windy Hill transmitter was great to see, because it’s very good-looking and it also meant I was close to Blackstone Edge. Crossing the Pennine Way footbridge over the M62 was a fantastic moment. I’ve been under this beauty so many times but never across it on foot yet.

I was surprised at how full of grit and pebbles it is -they could easily get kicked onto the carriageway below by a jogger’s trainer. Next time I pass under it I’m gonna hold my breath a bit.

A last uphill slog and I’d got to Blackstone Edge and looked for somewhere to pitch. Still inexperienced at wild camping I went for somewhere that was big enough for the tent to fit in, but not quite big enough to peg it out in. This resulted in a very ‘flappy’ pitch – not very sturdy-feeling or rainproof tonight. Hope it doesn’t rain.