I’m on Kinder, back from the edge sheltered from the wind by large hags and on ground that hopefully won’t saturate if there’s heavy rain tonight. Currently it’s pretty still but anything can happen up here. My altimeter app says I’m at 566 meters.

Today began with a trudge out of Combs up Eccles Pike. It’s a relatively small hill but forms an almost perfect triangular lump on the horizon. I took the zoomed-in portrait of Manchester and looked at the other hills I would be ascending today. 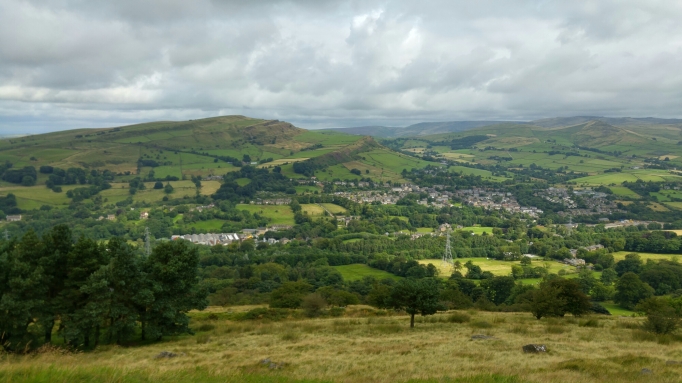 Though a shorter walk in miles and with less overall ascent and descent this was going to feel pretty strenuous. There weren’t many sections which felt like a pleasant strolling out of the miles – it seemed to be all trudging up or tottering down steep angles.

At the base of the ascent to Chinley Churn the A6 divides a footpath seemingly never used judging by the growth around the sign.

The dark overgrown path brought me out at the back of an industrial estate before sending me over a stream and under a railway bridge into Brierley Green. From there it was up an interminable series of steep fields to the base of Chinley Churn. One of the fields smelled breathtakingly foul. It was churned up with hoofprints and so I blamed the horses, but I was shocked they’d produced something so impressive. At the top of the series of fields – after the path suddenly gentrified as it passed through a well tended and monied-looking garden – I found a couple having a breather. They said they needed to find a way down, but wanted to avoid the field below as the farmer had filled it with slurry. Ah.

Chinley Churn is really huge. It’s got quarries, gritstone edges – various areas of rocky, lumpy interest. And lots of fields which are saddled over its walled-off summit.You have to scale a drystone wall or two to get to it, but its views over Manchester are splendid.

It had taken a lot out of me getting up there and the scale of the scaling yet to be done before pitching up today was starting to get me worried. I could take this adventure at my own pace, but with the stashes waiting at certain points on the route, things could start getting tricky nutrition and water-wise if I don’t get where I planned to each day. This has meant a little anxiousness on both days so far about whether I’d really make the distance or if I’d have to pitch up short of my target. It’s unfortunate to have deadlines on this… there is quite a jolt of euphoria though when I do realise I’m going to make it, but at the top of Chinley Churn I still had a lot of climbing to do and really wasn’t certain I’d get here.

It was heartening to discover my stash uneaten in the roadside thicket we’d left it in last Wednesday. The extra weight of it though felt like a bit of a self-kicking at this point, with so much more climbing to do. But I made it up Mount Famine and South Head – confirmed that South Head is indeed visible from home – and then got through the long slow trudge up to Brown Knoll. This is the last visible lump from Lamport Court before another block of flats hides everything from there to Bleaklow. I’m in the shadow of Silkin Court now until I break out into Lamport light again after a few miles tomorrow. 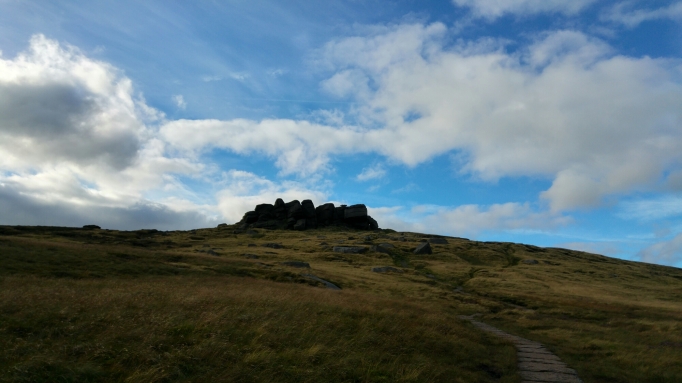 As I got to Kinder there were mountain rescue teams hovering in a helicopter over edge and waiting in jeeps on a path below Edale Rocks. Later, as I got closer to Kinder Low, someone’s rucksack was weighed down with a rock leaning on a cairn. I hope they’re okay. 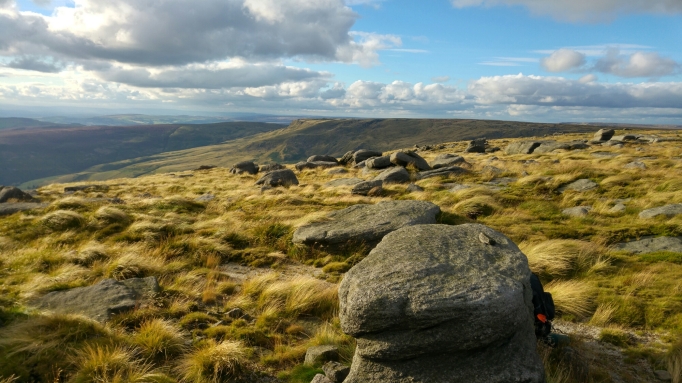 My mind and my legs were starting to sputter to a halt as I got close to Kinder Downfall – I realised I needed to pitch up at any suitable spot while I could still think straight. I dragged my legs up away from the edge onto the periphery of Kinder’s hag and grough interior and found a relatively windless spot. It took a couple of goes and a bit of adjustment to avoid squelchy ground but I think it’s going to be okay here.