Kinder is always spectacular and I think its northern edge will always be my favorite part, but this walk over Kinder Reservoir – a huge bowl of blank to the left, falling away from the alien boulder-strewn path – was incredible. It was like walking in a split atom of Popol Vuh. A Vuh-ish riff cycled in my head instead of the usual… perhaps I’ll talk about that later. Black beak and talon outjuttings over the edge fade into view above the huge nothing below.

The fog was lifting as I crossed the vast empty moor that connects Kinder and Bleaklow.

It had left a little artwork for me…

Whilst Kinder’s edges are a conveyor belt of wonders, you have to go hunting for the star attractions on Bleaklow – often over a maze of hags and groughs that can sap your will so thoroughly you end up ready to just offer yourself to the peat and let it suck you in.

The view from Higher Shelf Stones is stunning – the distant city, the heather in full purple against Bleaklow’s labrador coloured curves.

I stumbled across the site of the Boeing superfortress that crashed here in 1948. The wreckage looks strangely ‘fresh’. 13 people died here. Visitors have taken to making tributes with peat and stones.

I came off Bleaklow by the beautiful but interminable Torside Clough – it took a good hour more to descend than I’d judged so I started worrying about time.

A long steep climb from the valley to Robinson’s Moss followed, the bulk of this up a gorgeously overgrown path bordered by heather and wimberry shrubs. 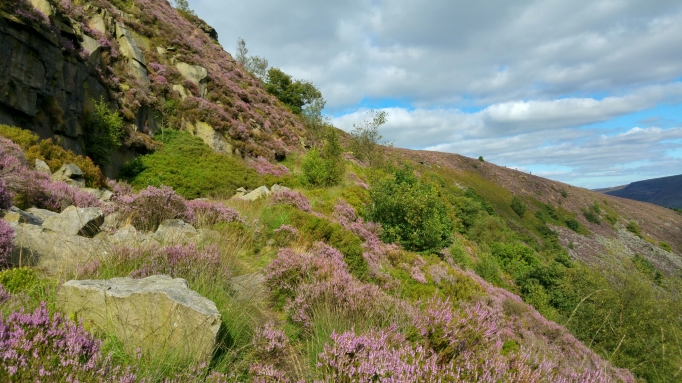 Then I was out onto pathless wild moor searching for the horizon. Underfoot there was either deep heather, tussocky grass, saturated bog or deep hags and groughs. This went on for miles of halting ascent and drained my energy and ability to think. I ‘misnavigated’ a couple if times – the legs are never heavier than when ascending distances you’ve descended in error. Eventually I find the peat pool at Windgate Edge I’d been looking for, but it was looking a little unspectacular after drying out somewhat in today’s sun. 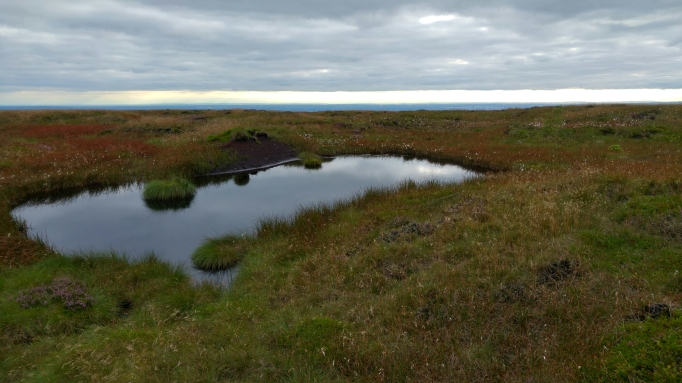 There followed a great dash to try to get to Alphin Pike before sunset. I was chasing the setting sun around corners and using energy – suddenly available to me in mild panic – that would’ve been very useful earlier in the day to prevent this situation. 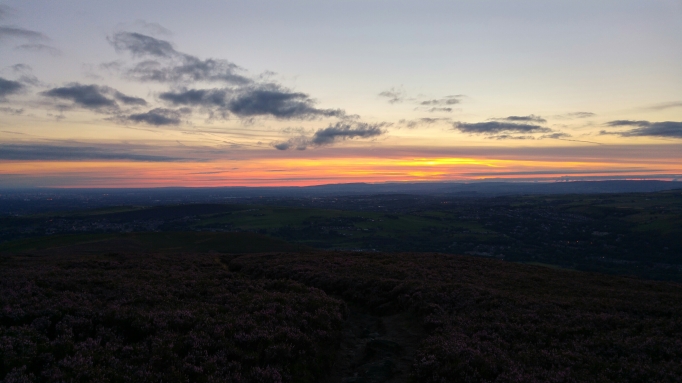 I got there, amazed I’d made it and blown away by Manchester actually dazzling now its lights were turning on. It was a long, darkening descent to the campsite though and it was after 10 when I finally found it, after a nightmare of a wrong turn had sent me halfway back into the hills again. I’d walked pretty much solidly for over 15 hours. Maybe I need a rest day tomorrow. Miles-wise I’m halfway there – I’ve 50 miles under my belt already.